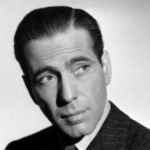 Humphrey DeForest Bogart was born in New York City, New York, USA. He was an American screen and stage actor. His role in several films include: The Maltese Falcon, Casablanca, The Big Sleep, The Petrified Forest, Angels with Dirty Faces, The Return of Doctor X, High Sierra, To Have and Have Not, Dark Passage, Key Largo, In a Lonely Place, The African Queen, Sabrina, The Caine Mutiny, We're No Angels, and The Harder They Fall. During a film career of almost 30 years, he appeared in more than 75 feature films. Over his career, he received three Academy Award nominations for Best Actor, winning one for The African Queen.