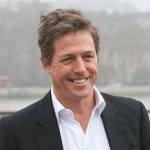 Hugh John Mungo Grant was born in Hammersmith, London, England. He is an English actor. He has received a Golden Globe, a BAFTA, and a British Academy Film Award for his work. He earned a BA degree in English literature from Oxford University in 1982. His films have earned more than US$2.4 billion from 25 theatrical releases worldwide. His role in several films include: Privileged, Maurice, Rowing with the Wind, Impromptu, Bitter Moon, The Remains of the Day, Four Weddings and a Funeral, Sirens, Sense and Sensibility, Mickey Blue Eyes, Notting Hill, Bridget Jones's Diary, About a Boy, Love Actually, American Dreamz, Cloud Atlas, and Florence Foster Jenkins. His role in television include: Jenny's War, Champagne Charlie, The Lady and the Highwayman, and The Trials of Oz.