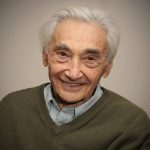 Howard Zinn was born in Brooklyn, New York, USA. He was an American historian, playwright, author and social activist. He was a political science professor at Boston University from 1964-1988. He wrote extensively about the civil rights and anti-war movements, and labor history of the United States. He earned a BA degree from New York University in 1951. He earned an MA degree in 1952 and a PhD in history with a minor in political science in 1956 from Columbia University. He was professor of history at Spelman College in Atlanta from 1956 to 1963, and visiting professor at both the University of Paris and University of Bologna. In 1960– 1961, he was a post-doctoral fellow in East Asian Studies at Harvard University. He wrote several books include: The Power of Nonviolence, Vietnam: the logic of withdrawal, Disobedience and Democracy, The politics of history, A People's History of the United States, You can't be neutral on a moving train(memoir), and Terrorism and war. He wrote several plays include: Marx in Soho and Emma. He received the Peace Abbey Courage of Conscience Award, the Thomas Merton Award, the Eugene V. Debs Award, the Lannan Literary Award, and the Upton Sinclair Award.