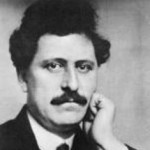 George Holbrook Jackson was born in Liverpool, England. He was a British journalist, writer and publisher. Around 1900 he was in the lace trade in Leeds, where he met A. R. Orage; together they founded the Leeds Arts Club. In 1907, Jackson and Orage bought The New Age, a struggling Christian Socialist weekly magazine, with finance from Lewis Wallace and George Bernard Shaw. From 1911 Jackson had an editorial position on T. P. O'Connor's T.P.'s Weekly, a newspaper with a strong literary emphasis. He took over as editor from Wilfred Whitten in 1914. Later he bought the publication, and converted it into his own literary magazine, To-Day, which was published 1917 to 1923, when it merged with Life and Letters. He wrote several books include: Bernard Shaw, Platitudes in the making, All Manner of Folk, The Eighteen Nineties, The anatomy of bibliomania, The fear of books, Bookman's Pleasure, and The reading of books.