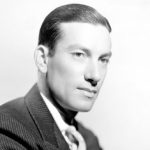 Howard Hoagland "Hoagy" Carmichael was born in Bloomington, Indiana, USA. He was an American composer, musician, singer, songwriter, actor and lawyer. He composed several hundred songs, including fifty that achieved hit record status. He collaborated with lyricist Johnny Mercer on "Skylark." Carmichael's "Ole Buttermilk Sky" was an Academy Award-nominee in 1946; "In the Cool, Cool, Cool of the Evening," with lyrics by Mercer, won the Academy Award for Best Original Song in 1951. His role in several films include: To Have and Have Not, Canyon Passage, Night Song, The Las Vegas Story, and Timberjack. He wrote two autobiographies, including The Stardust Road and Sometimes I Wonder. He earned a bachelor's degree in 1925 and a law degree in 1926 from Indiana University in Bloomington.