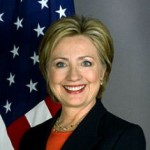 Hillary Diane Rodham Clinton was born in Chicago, Illinois, USA. She is an American politician, lawyer, diplomat, author and spokesperson. She was the 67th United States Secretary of State from 2009 to 2013, U.S. Senator from New York from 2001 to 2009, First Lady of the United States from 1993 to 2001, and the Democratic Party's nominee for President of the United States in the 2016 election. She earned a B.A. degree in Political Science from Wellesley College in 1969. She earned a  J.D. degree from Yale Law School in 1973. After serving as a congressional legal counsel, she moved to Arkansas and married Bill Clinton in 1975. As First Lady of the United States, she published a weekly syndicated newspaper column titled "Talking It Over" from 1995 to 2000. She has written several books include: It Takes a Village(received the Grammy Award for Best Spoken Word Album in 1997 for the book's audio recording), Dear Socks, Dear Buddy, An Invitation to the White House, Living History(autobiography), Hard Choices(memoir), and Stronger Together(with Tim Kaine).