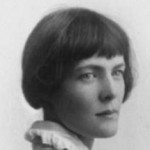 Hilda "H.D." Doolittle was born in Bethlehem, Pennsylvania, USA. She was an American poet and novelist. She published under the pen name of H.D.. She moved to London in 1911. From 1916–17, she acted as the literary editor of the Egoist journal, while her poetry appeared in the English Review and the Transatlantic Review. She had a deep interest in Ancient Greek literature, and her poetry often borrowed from Greek mythology and classical poets. She studied at Bryn Mawr College, Pennsylvania. She wrote several poems include: Sea Garden, The God, Hymen, Hippolytus Temporizes, Red Roses for Bronze, Tribute to the Angels, Trilogy, By Avon River, Helen in Egypt(Nominations:National Book Award for Poetry), and Hermetic definitions. She wrote several novels include: Palimpsest, HERmione( autobiography), Hedylus, Nights, Bid me to live, The Sword Went Out to Sea, Pilate's Wife, Asphodel, and Paint it today.