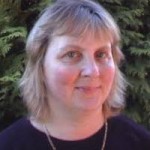 Hilary McKay was born in Boston, Lincolnshire, England. She is a British writer of children's books. She studied English, Zoology and Botany at St Andrews University, she then went on to work as a biochemist in an Analysis Department. She has written several books include: The Exiles(novel- won the 1992 Guardian Children's Fiction Prize), Saffy's Angel(novel- won the 2002 Whitbread Children's Book Award), Forever Rose(novel), The Exiles At Home(won the 1994 Nestlé Smarties Book Prize), Indigo's star, Permanent Rose, Caddy's World, Binny in Secret, Dolphin Luck, Lulu and the Dog from the Sea, The Zoo in the Attic, The Sticky Witch, Strange Bear, The Magic in the Mirror, and Beetle and Lulu.