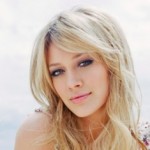 Hilary Erhard Duff was born in Houston, Texas, USA. She is an American actress and singer. Her role in several films include: Agent Cody Banks, The Lizzie McGuire Movie, Cheaper by the Dozen, A Cinderella Story, The Perfect Man, Cheaper by the Dozen 2, Material Girls(also producer), What Goes Up, According to Greta(also producer), Bloodworth, She Wants Me, and Flock of Dudes. Her role in television include: The Soul Collector(TV movie), Lizzie McGuire, Cadet Kelly(TV movie), Beauty & the Briefcase(TV film), and Younger(TV series). Her albums list shown below: Santa Claus Lane, Metamorphosis, Hilary Duff, Dignity, and Breathe In. Breathe Out. She has written several novels include: Elixir(with Elise Allen), Devoted(with Elise Allen), and True.