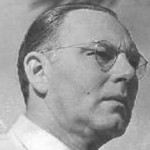 William Hervey Allen, Jr. was born in Pittsburgh, Pennsylvania, USA. He was an American author, novelist, poet and soldier. He graduated from the University of Pittsburgh in 1915. He was a Midshipman with the United States Navy from 1909-1910. He served as a Lieutenant in the 28th Division, United States Army during World War I. He wrote several books include: Ballads of the Border(poetry), The Blindman(poem), Wampum and old gold, The bride of Huitzil, Israfel(biography), Toward the flame(memoir), Anthony Adverse(novel), Action at Aquila, The Forest and the Fort(novel), Bedford Village, Toward the Morning, and The city in the dawn.