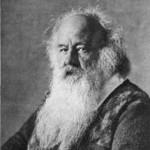 Hermann Bahr was born in Linz, Austria. He was an Austrian playwright. He studied at Vienna, Graz, Czernowitz and Berlin, devoting special attention to philosophy, political economy, philology and law. He began working as an art critic. In 1890, he became associate editor of Berliner Freie Bühne, and later became associate editor and critic of the Deutsche Zeitung. He wrote several plays include: The New People, The Mother, Das Tschaperl, Der Star, Wienerinnen, Der Krampus, Ringelspiel, The Concert, The Children, Das Prinzip, Der Querulant, and The Master.