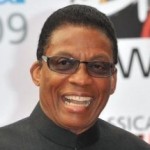 Herbert Jeffrey "Herbie" Hancock was born in Chicago, Illinois, USA. He is an American jazz musician, composer, record producer and actor. He was one of the first jazz musicians to embrace synthesizers and funk music. His music is often melodic and accessible; he has had many songs "cross over" and achieved success among pop audiences. His best-known compositions include "Cantaloupe Island", "Watermelon Man", "Maiden Voyage", "Chameleon", and the singles "I Thought It Was You" and "Rockit". His 2007 tribute album River: The Joni Letters won the 2008 Grammy Award for Album of the Year. His role in several films include: Round Midnight, Indecent Proposal, Hitters, and Valerian and the City of a Thousand Planets(upcoming 2017). His albums list shown below: Takin' Off, Empyrean Isles, Speak Like a Child, Crossings, Head Hunters, Secrets, Sunlight, The Piano, Magic Windows, Perfect Machine, The New Standard, Possibilities, and The Imagine Project.