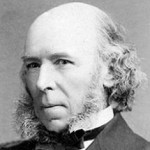 Herbert Spencer was born in Derby, Derbyshire, England. He was an English philosopher and sociologist. He developed an all-embracing conception of evolution as the progressive development of the physical world, biological organisms, the human mind, and human culture and societies. As a polymath, he contributed to a wide range of subjects, including ethics, religion, anthropology, economics, political theory, philosophy, literature, astronomy, biology, sociology, and psychology. He is best known for the expression "survival of the fittest", which he coined in Principles of Biology, after reading Charles Darwin's On the Origin of Species.