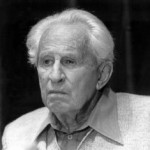 Herbert Marcuse was born in Berlin, Germany. He was a German-American philosopher, sociologist, and political theorist. He earned his Ph.D. from the University of Freiburg in 1922. He was a prominent figure in the Frankfurt-based Institute for Social Research – what later became known as the Frankfurt School. After his studies, in the late 1960s and the 1970s he became known as the preeminent theorist of the New Left and the student movements of Germany, France, and the United States. He served as a professor at Columbia University, Harvard University, Brandeis University, and University of California, San Diego. He wrote several books include: Reason and Revolution, Soviet Marxism, Eros and Civilization, One-Dimensional Man, Counterrevolution and Revolt, Studies in critical philosophy, and The Aesthetic Dimension.