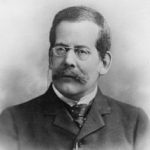 Henry Sweet was born in London, England. He was an English philologist. As a philologist, he specialized in the Germanic languages, particularly Old English and Old Norse. In addition, he published works on larger issues of phonetics and grammar in language and the teaching of languages. He educated at  King's College School, London and Balliol College, Oxford. In 1864, he spent a short time studying at the Heidelberg University, Germany. He graduated, nearly thirty years old, with a fourth-class degree in literae humaniores. He wrote several books include: Anglo-Saxon primer, The oldest English texts, A handbook of phonetics, A Primer of Spoken English, The practical study of languages, The sounds of English, An Icelandic primer, and The history of language.