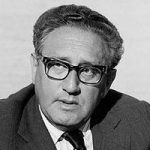 Henry Alfred Kissinger was born in Fürth, Bavaria, Germany. He is an American diplomat, statesman and political scientist. He served as National Security Advisor and later concurrently as United States Secretary of State in the administrations of presidents Richard Nixon and Gerald Ford. For his actions negotiating an unsuccessful ceasefire in Vietnam, Kissinger received the 1973 Nobel Peace Prize under controversial circumstances, with two members of the committee resigning in protest. He received his BA(political science), MA, and PhD(International Relations) degrees from Harvard University in 1950, 1952, and 1954. His doctoral dissertation was titled "Peace, Legitimacy, and the Equilibrium". He has written several books include: A World Restored, Nuclear Weapons and Foreign Policy(Nominations: National Book Award for Nonfiction), American Foreign Policy, White House years(memoir), Years of Upheaval(memoir), Diplomacy, Years of Renewal(memoir), Does America Need a Foreign Policy?, Ending the Vietnam War, and On China.