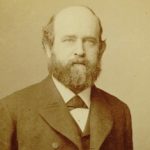 Henry George was born in Philadelphia, Pennsylvania, USA. He was an American political economist, philosopher and writer. His immensely popular writing is credited with sparking several reform movements of the Progressive Era, and inspiring the broad economic philosophy known as Georgism, based on the belief that people should own the value they produce themselves, but that the economic value derived from land should belong equally to all members of society. His most famous work, Progress and Poverty, sold millions of copies worldwide, probably more than any other American book before that time. He wrote other books include: Our land and land policy, The Irish Land Question, Social problems, The Crime of Poverty, Protection Or Free Trade, The science of political economy, The Life of Henry George, and A Perplexed Philosopher.