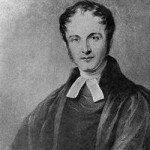 Henry Francis Lyte was born in Ednam, Scotland. He was a Scottish pastor, hymn-writer and poet. He educated at Trinity College, Dublin. However, in about 1816, he experienced an evangelical conversion. In attendance on a dying priest, the latter convinced Lyte that both had earlier been mistaken in not having taken the Epistles of St. Paul "in their plain and literal sense." He began to study the Bible "and preach in another manner," following the example of four or five local clergymen whom he had previously laughed at and considered "enthusiastic rhapsodists." Lyte's first composition was Tales in Verse illustrative of Several of the Petitions in the Lord's Prayer. His next published Poems, chiefly Religious, and in 1834, a small collection of psalms and hymns entitled The Spirit of the Psalms. . Three of Lyte's best-known hymns are paraphrases of psalms, published in The Spirit of the Psalms: "Praise, my soul, the King of heaven", "God of Mercy, God of Grace", and "Pleasant are thy courts above".