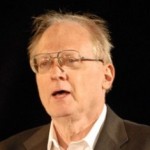 Henry Flynt was born in Greensboro, North Carolina, USA. He is an American philosopher, musician and exhibited artist often associated with Conceptual Art, Fluxus and Nihilism. In 1961 he coined the term concept art in the Neo-Dada, proto-Fluxus book An Anthology of Chance Operations that was released in 1963. He is also known for his musical work, often with him performing on violin, that attempted to fuse avant-garde music with free-jazz, country blues, rock music and hillbilly country music. He wanted avant-garde art to become superseded by the terms of veramusement and brend—neologisms meaning approximately pure recreation. His albums list shown below: Back Porch Hillbilly Blues, Volume 1, Back Porch Hillbilly Blues, Volume 2, Raga Electric, Graduation, Hillbilly Tape Music, and Spindizzy.