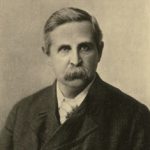 Henry Austin Dobson was born in Plymouth, Devon, England. He was an English poet, essayist, biographer, critic and civil servant. He served as a civil servant at the British Board of Trade in 1856, where he remained until his retirement in 1901. His first collection of poems, Vignettes in Rhyme, was followed by Proverbs in Porcelain. In these and in At the Sign of the Lyre, Dobson showed the polish, wit, and restrained pathos that made his verses popular. His biographies of Henry Fielding, Thomas Bewick, Richard Steele, Oliver Goldsmith, Horace Walpole and William Hogarth are studies marked alike by assiduous research, sympathetic presentation and sound criticism. He received an honorary doctorate from the University of Edinburgh in March 1902.