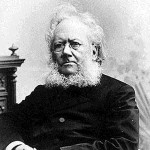 Henrik Johan Ibsen was born in Skien, Grenland, Norway. He was a Norwegian playwright, theatre director and poet. His major works include Brand, Peer Gynt, An Enemy of the People, Emperor and Galilean, A Doll's House, Hedda Gabler, Ghosts, The Wild Duck, When We Dead Awaken, Pillars of Society, The Lady from the Sea, Rosmersholm, The Master Builder and John Gabriel Borkman. He is the most frequently performed dramatist in the world after Shakespeare, and A Doll's House became the world's most performed play by the early 20th century.