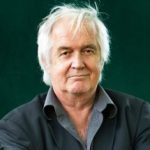 Henning Mankell was born in Stockholm, Sweden. He was a Swedish crime writer, novelist and playwright. In his books and plays he constantly highlighted social inequality issues and injustices in Sweden and abroad. In 2010, he was on board one of the ships in the Gaza Freedom Flotilla that was boarded by Israeli military forces. He wrote several novels include: Faceless Killers, The Troubled Man, The White Lioness, Sidetracked, One Step Behind, The Fifth Woman, The Man Who Smiled, Before the Frost, The Man from Beijing, Italian Shoes, Firewall, Kennedy's Brain, Chronicler of the Winds, Secrets in the Fire, Depths, Playing with Fire, and Daniel. He wrote several plays include: The Amusement Park, Beloved Sister, The Orange Tree, To Storm Heaven, The Rock Blaster, Fire Riddle, and Time of Darkness. He was awarded an honorary Doctorate from the University of St Andrews, Scotland.