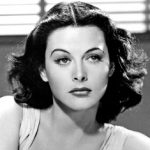 Hedy Lamarr was born in Vienna, Austria. She was an Austrian-born American film actress and inventor. She was married and divorced six times. Her role in several films include: Gold on the Street, Ecstasy, Algiers, I Take This Woman, Comrade X, Come Live with Me, White Cargo, The Heavenly Body, The Strange Woman, Dishonored Lady, Samson and Delilah, A Lady Without Passport, My Favorite Spy, Loves of Three Queens, The Story of Mankind, and The Female Animal. At the beginning of World War II, Lamarr and composer George Antheil developed a radio guidance system for Allied torpedoes, which used spread spectrum and frequency hopping technology to defeat the threat of jamming by the Axis powers. Though the US Navy did not adopt the technology until the 1960s, the principles of their work are now incorporated into modern Wi-Fi, CDMA, and Bluetooth technology, and this work led to their being inducted into the National Inventors Hall of Fame in 2014. She is the author of her autobiography, Ecstasy and Me: My Life as A Woman.