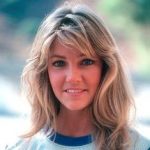 Heather Deen Locklear was born in Westwood, California, USA. She is an American actress. She graduated from Newbury Park High School. She is known for her role as Amanda Woodward on Melrose Place, for which she received four consecutive Golden Globe nominations for Best Actress-Television Series Drama. Her other notable television roles include: Dynasty, T. J. Hooker, Spin City(two Golden Globe nominations for Best Actress-Television Series Musical or Comedy), Hot in Cleveland, and Franklin & Bash. Her role in several films include: Firestarter, The Return of Swamp Thing(won-Golden Raspberry Awards for Worst Actress), Money Talks, Looney Tunes: Back in Action, Uptown Girls, The Perfect Man, Game of Life, Flirting with Forty, Flying By, and Scary Movie 5.