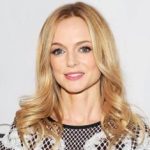 Heather Joan Graham was born in Milwaukee, Wisconsin, USA. She is an American actress and model. She studied English for two years at the University of California, Los Angeles. She was ranked at number 40 in FHM's 100 Sexiest Women in the World list in 2000. In 2001 she was named one of the 50 Most Beautiful People by People. in 2003, she appeared on the cover of Time magazine for an article titled "The Science of Meditation". In 2005, she became the spokeswoman and TV model for the Garnier brand of hair care products. Her role in several films include: License to Drive, Drugstore Cowboy, Shout, Diggstown, Six Degrees of Separation, Swingers, Boogie Nights(won MTV Movie Award for Best Breakthrough Performance), Austin Powers(Nominated—Saturn Award for Best Actress), Bowfinger, Bobby(won Hollywood Film Award for Ensemble of the Year), Miss Conception, ExTerminators, 5 Days of War, Goodbye to All That, and Behaving Badly. Her role in television include: Student Exchange(TV film), O Pioneers!(TV film), Emily's Reasons Why Not(TV series), Flowers in the Attic(TV film), Californication (TV series), and If There Be Thorns(TV film).