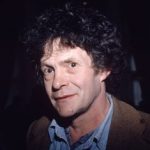 Heathcote Williams was born in Helsby, Cheshire, England. He is an English poet, actor, playwright, painter, sculptor and screenwriter. His role in several films include: Malatesta, The Tempest, Orlando, The Browning Version, Blue Juice, Miss Julie, Alegria, Revelation, and Basic Instinct 2. He has written plays, including AC/DC and The Local Stigmatic. He has written several poetry include: Falling for a dolphin, Whale Nation, Autogeddon, and Sacred Elephant. He has written several films include: The Local Stigmatic, Hotel, and Malatesta.