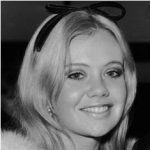 Hayley Catherine Rose Vivien Mills was born in Marylebone, London, England. She is an English actress. She began her acting career as a child and was hailed as a promising newcomer, winning the BAFTA Award for Most Promising Newcomer for Tiger Bay, the Academy Juvenile Award for Pollyanna and Golden Globe Award for New Star of the Year-Actress in 1961. During her early career, she appeared in six films for Walt Disney, including her dual role as twins Susan and Sharon in the Disney film The Parent Trap. Her role in other films include: Whistle Down the Wind, Summer Magic, The Chalk Garden, The Truth About Spring, The Family Way, Twisted Nerve, Take a Girl Like You, Endless Night, The Kingfisher Caper, Deadly Strangers, Appointment with Death, and Foster. Her role in television include: The Flame Trees of Thika, Good Morning, Miss Bliss, Back Home(TV film), and Wild at Heart.