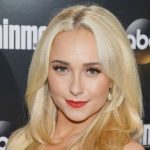 Hayden Leslie Panettiere was born in Palisades, New York, USA. She is an American actress, model and singer. She is known for her roles as cheerleader Claire Bennet on the NBC sci-fi series Heroes, and Juliette Barnes in the ABC/CMT musical drama series Nashville. Her role in several films include: The Object of My Affection, Message in a Bottle, Dinosaur, Raising Helen, The Architect, Fireflies in the Garden, Scream 4, The Forger, and Custody. Her role in television include: One Life to Live, Guiding Light, Too Rich, If You Believe(TV film), Ally McBeal, and Lies My Mother Told Me(TV film). She was nominated for a Grammy Award in 1999 for A Bug's Life. In 2004, she recorded a song entitled "My Hero Is You" with a video for the Disney Channel film she starred in, Tiger Cruise, and "Someone Like You," a duet with Watt White for another film, The Dust Factory. The next year she recorded a song entitled "I Fly" for the Disney film Ice Princess in which she also co-starred. In late 2006, Neutrogena made Panettiere the cover girl for their new worldwide ad campaign. From 2007 to 2008, she designed limited edition hand bags for Dooney & Bourke and modeled their bags in magazine ads.