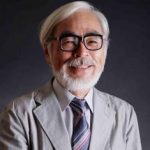 Hayao Miyazaki was born in Bunkyō, Tokyo, Japan. He is a Japanese film director, producer, author, screenwriter, animator and manga artist. He graduated from Gakushuin in 1963 with degrees in political science and economics. He began his animation career in 1963, when he joined Toei Animation. He continued to work in various roles in the animation industry until he directed his first feature film, Lupin III: The Castle of Cagliostro, released in 1979. He directed and written several Japanese animated fantasy films include: Castle in the Sky, My Neighbor Totoro, Porco Rosso, Princess Mononoke, Spirited Away(won the Academy Award for Best Animated Feature), Howl's Moving Castle, Looking for a Home(also produced), Mizugumo Monmon(also produced-short film), Ponyo, and The Wind Rises. He has written several books include: Starting Point: 1979-1996, Turning Point: 1997-2008, Art of Princess Mononoke, The Art of Castle in the Sky, and The Journey of Shuna(novel).