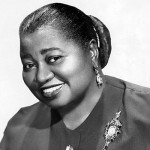 Hattie McDaniel was born in Wichita, Kansas, USA. She was an American actress and comedian. She is best known for her role as Mammy in Gone with the Wind, for which she won the Academy Award for Best Supporting Actress, the first African American to win an Academy Award. She was a professional singer-songwriter, radio performer and television star. She was the first black woman to sing on the radio in the USA. She appeared in over 300 films. Her role in several films include: Judge Priest, Lost in the Stratosphere, The Little Colonel, Alice Adams, The First Baby, Gentle Julia, The Crime Nobody Saw, Saratoga, True Confession, The Mad Miss Manton, Zenobia, The Male Animal, Janie, Margie, Mickey, and The Big Wheel. She was the first black Oscar winner honored with a US postage stamp.