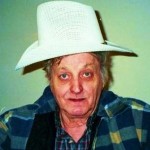 Hasil Adkins was born in Boone County, West Virginia, USA. He was an American singer-songwriter and musician. His genres include rock and roll, country, blues and more commonly rockabilly, and because of his unusual playing and singing style, he is often cited as an example of outsider music. He generally performed as a one-man band, playing guitar and drums at the same time. His albums list shown below: Out to Hunch, The Wild Man, Peanut Butter Rock and Roll, Look at That Caveman Go!!, Achy Breaky Ha Ha Ha, Chicken Walk(with Alan Gerber), What the Hell Was I Thinking, Drinkin' My Life Away, Live in Chicago, Poultry In Motion, Moon Over Madison, Best of the Haze, and Lost Tapes.