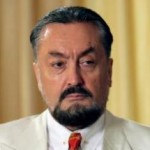 Harun Yahya (Adnan Oktar) was born in Ankara, Turkey. He is a Turkish author as well as an Islamic creationist. He studied at Mimar Sinan Fine Arts University and Istanbul University. In 2007, he sent thousands of unsolicited copies of his book, The Atlas of Creation, which advocates Islamic creationism, to American scientists, members of Congress, and science museums. He has written several books include: Perished nations, The miracle in the atom, The Evolution Deceit, Deep thinking, For men of understanding, Never plead ignorance, The creation of the universe, Allah Is Known Through Reason, Jesus Will Return, Before you regret, Islam denounces terrorism, Design in Nature, Islam and Karma, and The truth of the life of this world.