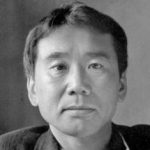 Haruki Murakami was born in Kyoto, Japan. He is a Japanese novelist and short-story writer. His books and stories have been bestsellers in Japan as well as internationally, with his work being translated into 50 languages and selling millions of copies outside his native country. He has written several novels include: Hear the Wind Sing, Pinball, 1973, Hard-Boiled Wonderland and the End of the World, A Wild Sheep Chase, Norwegian Wood, Dance Dance Dance, South of the Border, West of the Sun, The Wind-Up Bird Chronicle, Sputnik Sweetheart, Kafka on the Shore, Afterdark, 1Q84, Murakami Diary 2009, Colorless Tsukuru Tazaki and His Years of Pilgrimage, and Wind/Pinball. He has written several short stories include: The Elephant Vanishes, after the quake, and Blind Willow, Sleeping Woman.