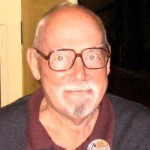 Harry Max Harrison was born in Stamford, Connecticut, USA. He was an American novelist, writer and illustrator. He started in the science fiction field as an illustrator, notably with EC Comics' two science fiction comic book series, Weird Fantasy and Weird Science. In these and other comic book stories, he most often worked with Wally Wood. He wrote several novels include: Planet of the Damned, The Stainless Steel Rat, Bill, the Galactic Hero, Make Room! Make Room!, The Technicolor Time Machine, Captive Universe, The Daleth Effect, Spaceship Medic, Tunnel Through the Deeps, Star Smashers of the Galaxy Rangers, A Rebel in Time, West of Eden, Winter in Eden, and Return to Eden. He wrote several Short story collections include: Two Tales and Eight Tomorrows, War with the Robots, Prime Number, One Step from Earth, and 50 in 50.