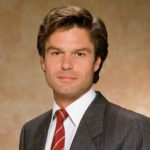 Harry Robinson Hamlin was born in Pasadena, California, USA. He is an American film and TV actor, known for his roles as Perseus in the 1981 fantasy film Clash of the Titans, and as Michael Kuzak in the legal drama series L.A. Law(Nominated—Golden Globe Award for Best Actor). He graduated with a BA degree in Drama and Psychology from Yale University in 1974. He then attended the American Conservatory Theatre's Advanced Actor Training Program from which he was subsequently awarded a Master of Fine Arts degree in Acting. His role in several films include: Movie Movie(Nominated—Golden Globe Award for New Star of the Year-Actor), Making Love, Blue Skies Again, Frogs for Snakes, Strange Wilderness, Bleeding Heart, Director's Cut, and Rebirth. His role in television include: Laguna Heat(TV movie), Movie Stars, Quarantine(TV film), Disappearance(TV film), You Lucky Dog(TV film), and Rush.