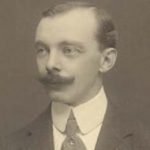 Jocelyn Henry Clive 'Harry' Graham was born in London, England. He was an English writer, poet, journalist, lyricist and translator. He is now best remembered as a writer of humorous verse in a style of grotesquerie and black humour. He was educated at Eton and the Royal Military College, Sandhurst. His first published works appeared during his military career. During the war, he started to write lyrics for English operettas and musical comedies, including Tina, Sybil, the 1917 hit operetta The Maid of the Mountains and A Southern Maid, and English adaptations of European operettas such as Whirled into Happiness, Madame Pompadour, The Land of Smiles and many others. He wrote several books include: Ruthless Rhymes for Heartless Homes, Ballads of the Boer War, Misrepresentative Men, Verse and Worse, A Group of Scottish Women, Familiar Faces, The Mother of Parliaments, Little Miss Nobody, When Grandmama Fell Off the Boat, and The Motley Muse.