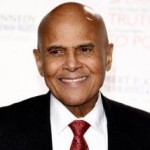 Harold George "Harry" Bellanfanti, Jr., better known as Harry Belafonte was born in Harlem, New York, USA. He is an American singer, lyricist, actor and social activist. One of the most successful Caribbean American pop stars in history, he was dubbed the "King of Calypso" for popularizing the Caribbean musical style with an international audience in the 1950s. He is perhaps best known for singing "The Banana Boat Song", with its signature lyric "Day-O". His role in several films include: Carmen Jones, Island in the Sun, Odds Against Tomorrow, The Angel Levine, Uptown Saturday Night, Kansas City, and Bobby. His albums list shown below: Calypso, Love Is a Gentle Thing, Swing Dat Hammer, Jump Up Calypso, Turn the World Around, Paradise in Gazankulu, and Close Your Eyes. He was an early supporter of the Civil Rights Movement in the 1950s and 1960s, and one of Martin Luther King, Jr.'s confidants. Since 1987 he has been a UNICEF Goodwill Ambassador. He has won three Grammy Awards, including a Grammy Lifetime Achievement Award, an Emmy Award, and a Tony Award.