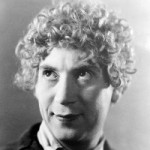 Arthur Duer Marx, known professionally as Harpo Marx was born in New York City, New York, USA. He was an American comedian, actor, mime artist and the second-oldest of the Marx Brothers. He wore a curly reddish blonde wig, and never spoke during performances. His role in several films include: The Cocoanuts, Animal Crackers, Monkey Business, Horse Feathers, Duck Soup, A Night at the Opera, A Day at the Races, Room Service, The Big Store At the Circus, The Big Store, and Love Happy.