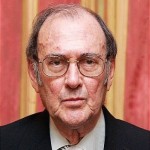 Harold Pinter was born in Hackney, London, England. He was a Nobel Prize-winning English playwright, screenwriter, poet, director and actor. One of the most influential modern British dramatists, his writing career spanned more than 50 years. He studied at Hackney Downs School and Royal Academy of Dramatic Art. He wrote several plays include: The Room, The Birthday Party, The Homecoming, Betrayal, and No Man's Land. His screenplay adaptations of others' works include The Servant, The Go-Between, The French Lieutenant's Woman, The Trial, and Sleuth. He also directed or acted in radio, stage, television, and film productions of his own and others' works.