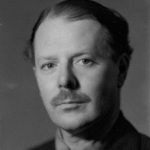 Sir Harold George Nicolson was born in Tehran, Persia. He was an English diplomat, author, diarist and politician. He was educated at Wellington College and Balliol College, Oxford. In 1909 he joined HM Diplomatic Service. He served as attaché at Madrid in 1911, and then Third Secretary at Constantinople from 1912 to 1914. During the First World War, he served at the Foreign Office in London. Promoted First Secretary in 1920, he was appointed private secretary to Sir Eric Drummond, first Secretary-General of the League of Nations, but was recalled to the Foreign Office in June 1920. He entered the House of Commons as National Labour Member of Parliament for Leicester West in the 1935 election. He wrote several books include: The Harold Nicolson Diaries, Sweet waters, Paul Verlaine(biography), Peacemaking 1919, Why Britain is at War, Diplomacy, The Age of Reason, and The meaning of prestige. He is also remembered for his 1932 novel Public Faces, foreshadowing the nuclear bomb.