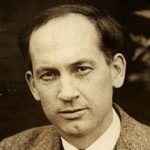 Harold Adams Innis was born in Otterville, Canada. He was a Canadian economist, philosopher, author and professor. He served as a  professor of political economy at the University of Toronto and the author of seminal works on media, communication theory, and Canadian economic history. He helped develop the staples thesis, which holds that Canada's culture, political history, and economy have been decisively influenced by the exploitation and export of a series of "staples" such as fur, fishing, lumber, wheat, mined metals, and coal. He studied at McMaster University and University of Chicago. He wrote several books include: A History of the Canadian Pacific Railway, The fur trade in Canada, The cod fisheries, Empire and Communications, The Bias of Communication, and Changing concepts of time.