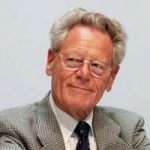 Hans Kung was born in Sursee, Switzerland. He is a Swiss Catholic priest, theologian, professor and author. Since 1995 he has been President of the Foundation for a Global Ethic. He is notable for his rejection of the doctrine of papal infallibility. Although he is not officially allowed to teach Catholic theology, his priestly faculties have not been revoked. In 1979, he had to leave the Catholic faculty, but remained at the University of Tübingen as a professor of ecumenical theology, serving as an emeritus professor since 1996. He has written several books include: On Being a Christian, The Catholic Church, Disputed Truth, Christianity, Great Christian thinkers, Theology for the Third Millennium, Freud and the problem of God, Islam: Past, Present and Future, and What I Believe.