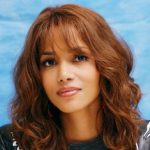 Halle Maria Berry was born in Cleveland, Ohio, USA. She is an American actress and former fashion model. She won an Academy Award for Best Actress in 2002 for her performance in the romantic drama Monster's Ball. She is also a Revlon spokesmodel. Before becoming an actress, she started modeling and entered several beauty contests, finishing as the 1st runner-up in the Miss USA Pageant and coming in 6th place in the Miss World Pageant in 1986. Her role in several films include: The Flintstones, Bulworth, Swordfish, Die Another Day, Cloud Atlas, The Call, X2, X-Men: The Last Stand, and X-Men: Days of Future Past. Her role in television include: Living Dolls, Alex Haley's Queen, Solomon & Sheba(TV movie), The Wedding, Introducing Dorothy Dandridge(TV movie - won Emmy Award and Golden Globe Award for Best Actress), Their Eyes Were Watching God(TV movie), and Extant.