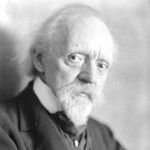 Sir Thomas Henry Hall Caine was born in Runcorn, Cheshire, England. He was a British novelist and politician. Many of his novels were also made into films. His novels were primarily romances, involving love triangles, but also addressed some of the more serious political and social issues of the day. He wrote several novels include: The Shadow of a Crime, The Deemster, The Bondman, The Manxman, The Christian, A Son of Hagar, She's All the World to Me, The Master of Man, The Woman of Knockaloe, The Eternal City, The White Prophet, and The Scapegoat. In 1901 he was elected a Member of the House of Keys as a Liberal for the constituency of Ramsey at a by-election and was re-elected, with a smaller majority, in 1903.