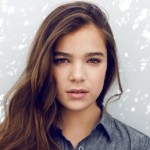 Hailee Steinfeld was born in Tarzana, Los Angeles, California, USA. She is an American actress, singer and model. She is known for her portrayal of Mattie Ross in the 2010 film True Grit, for which she was nominated for the Academy Award for Best Supporting Actress, the Screen Actors Guild Award for Outstanding Performance by a Female Actor in a Supporting Role, and the BAFTA Award for Best Actress in a Leading Role. Her role in several films include: Hateship, Loveship, Begin Again, Romeo & Juliet, Ender's Game, 3 Days to Kill, The Homesman, The Keeping Room, Ten Thousand Saints, Pitch Perfect 2, Barely Lethal, Term Life, and The Edge of Seventeen. She was hired as the face of Miu Miu shortly after True Grit was released in 2011. She debuted her singing voice in Pitch Perfect 2 and released a cover version of "Flashlight", the song she sang in the film. In 2015, she signed a recording deal with Republic Records. Her debut single "Love Myself" was released along with a music video in August 2015, which has been certified platinum. Her debut EP, Haiz, was released in November 2015.