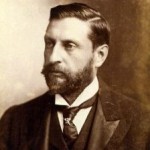 Sir Henry Rider Haggard, known as H. Rider Haggard was born in Bradenham, Norfolk, England. He was an English writer of adventure novels set in exotic locations, predominantly Africa, and a pioneer of the Lost World literary genre. He wrote several novels include: Dawn, The Witch's Head, King Solomon's Mines, Allan Quatermain, Ayesha, Nada the Lily, Eric Brighteyes, Jess, Cleopatra, The World's Desire, Heart of the World, and The Wizard.