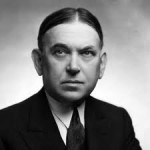 Henry Louis Mencken was born in Baltimore, Maryland, USA. He was an American journalist, essayist, magazine editor, writer, satirist, cultural critic and scholar of American English. Known as the "Sage of Baltimore", he is regarded as one of the most influential American writers and prose stylists of the first half of the twentieth century. As a scholar he is known for The American Language, a multi-volume study of how the English language is spoken in the United States. He graduated from the Baltimore Polytechnic Institute in 1896. He served as a reporter at the Herald for six years. He then moved to The Baltimore Sun. He continued to contribute to The Sun, The Evening Sun and The Sunday Sun full-time until 1948, when he stopped writing after suffering a stroke. In 1908, he became a literary critic for The Smart Set magazine, and in 1924 he and George Jean Nathan founded and edited The American Mercury, published by Alfred A. Knopf. He wrote several books include: The Philosophy of Friedrich Nietzsche, A Book of Prefaces(collection of essays), In Defense of Women, The American Language, Treatise on the Gods, Happy Days(memoir), and The Libido for the Ugly(essay).