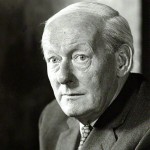 Herbert Ernest Bates, better known as H. E. Bates was born in Rushden, Northamptonshire, English. He was an English author, novelist and writer. He educated at Kettering Grammar School. After leaving school, he worked as a reporter and a warehouse clerk. He wrote several novels include: The Two Sisters, Fair Stood the Wind for France, The Cruise of the Breadwinner, The Purple Plain, The Jacaranda Tree, Love for Lydia, The Nature of Love, The Feast of July, The Darling Buds of May, A Moment in Time, and The Triple Echo. He wrote several short stories include: My Uncle Silas, The Beauty of the Dead, The Greatest People in the World, Colonel Julian, The Day of the Tortoise, The Watercress Girl, and The Four Beauties. He wrote several autobiography include: The Vanished World, The Blossoming World, and The World in Ripeness.