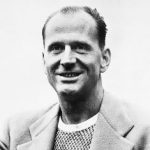 Harry Allen Wolfgang Smith was born in McLeansboro, Illinois, USA. He was an American well known journalist, author and humorist whose books were popular in the 1940s and 1950s, selling millions of copies. He began his writing career with the Huntington Press in 1922, at the age of fifteen. At the age of nineteen he was the editor of the Sebring Daily American in Florida. In 1929, he became a United Press rewrite man, also handling feature stories and celebrity interviews. He continued as a feature writer with the New York World-Telegram from 1934 to 1939. He wrote several books include: Low man on a totem pole(humor), Life in a putty knife factory(humor), Lost in the horse latitudes, 3 Smiths in the Wind (anthology), Rhubarb(novel), Larks in the popcorn, Low and Inside(with Ira Lepouce Smith), People named Smith, Three Men on Third(with Ira Lepouce Smith), The compleat practical joker(humor), The Age of the Tail(novel), To Hell in a Handbasket(autobiography), Son of Rhubarb(novel), The great chili confrontation, The view from Chivo, and The Life and Legend of Gene Fowler.