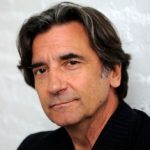 Thomas Griffin Dunne, known professionally as Griffin Dunne was born in New York City, New York, USA. He is an American actor, film producer, and film director. His role in several films include: The Other Side of the Mountain, Johnny Dangerously, After Hours, Who's That Girl, My Girl, Quiz Show, Game 6, and I Like It Like That. He directed several films include: Addicted to Love, Practical Magic, Famous, Fierce People, The Accidental Husband, and Movie 43. He produced several films include:  Head over Heels, Baby It's You, After Hours, Running on Empty, White Palace, Once Around, Joe's Apartment, Fierce People, and Game 6.